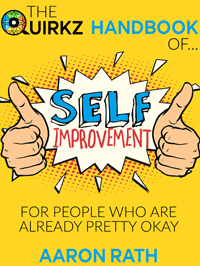 Today’s goal is to declutter, or simplify, which is another way of saying, “Get rid of some junk.” I think the title of today’s exercise, “prune,” is an apt one. (More so if you have old fruit to throw away.) Pruning is about improving what is left behind by selectively getting rid of things that shouldn’t be there.

Most of us have too much junk. Stuff piles up pretty easily, often unintentionally, although we do live in a society that puts a lot of value on collecting material things, so in many cases the pile of excess is all too intentional. But I’m not here to take you on a guilt trip, nor is my goal to analyze society at large (there aren’t enough days in the year for that job). The point is to simplify your life, just a little, by shedding things no longer wanted or needed.

A lot of declutter programs get pretty serious. I’ve heard of one that requires disposing of so many pounds of stuff before the challenge is over, and another that demands trashing something every day for a month. Really strict anti-clutter activists may make a policy of finding something to get rid of before they’re allowed to bring something new into the house. Don’t worry, I’m not going there. It’s easy enough if you’re replacing a shirt or coffee mug, but if I had to dump something every time I bought a new book, I’d have a pile of books and nothing else.

Today’s challenge is to spend about half an hour grabbing some immediately apparent stuff for an easy win. Come to think of it, “Go for the easy win” would make an awesome tee shirt.

Some things to consider:

That’s just a starter list, but it should be enough for a first pass. Try to get at least 10 items (use grocery store express lane item count—a box of a dozen light bulbs for the lamp that broke three years ago is 1 item, not 12, whereas 3 pairs of pants is 3 things, and you’ll need advanced calculus to decide how to count the 4 pens and a broken pencil you pulled out of the junk drawer), but if you haven’t done a declutter before, I’d bet you can double or triple that pretty easily. If you like the results, nothing’s stopping you from going further now, making a regular habit of decluttering (like a monthly pass-over, say), or turning it into your next project when this is done (more about this on Day 24). Still, if you hit half an hour or 10 items and want to call it quits, I’d say that’s mission accomplished.

Don’t assume you have to throw away your stuff. In approximate order of personal utility you might be able to:

Just make sure that your plans to get rid of an item productively (like selling it) work out quickly, so you don’t end up holding onto it forever.
Posted by Quirkz at 10:01 PM