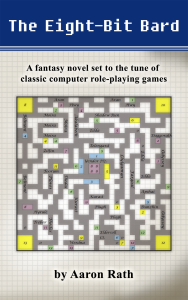 The evil sorcerer Ssor Ssorensen must have attended the "freeze them with perpetual winter" school of villainy, because when he and his minions conquered the town of Noresha, the first thing he did (after taking a nice, hot bath) was encase the city in ice. Then he laid out a thirteen-dungeon obstacle course challenge, filled with mind-twisting riddles, fiendish traps, and a bevy of the most monstrous guardians a conqueror's shoestring budget can afford, because that's what the best of the bad guys do.

Strife inevitably brings resistance. A band of heroes led by Yorel the paladin, calling themselves the Phoenix Dragons, are the front runners to challenge the sorcerer and put an end to his menace.

This is not their story. This is the story of Endrew the bard, a fallen hero and humiliated former Phoenix Dragon, who has to team up with a pack of misfits just to make it through the week. His companions include an untrained rogue, an unusually sophisticated half-orc mage, a misplaced pixie, a dwarven monk full of unlikely theories, and a halfling warrior who wants more than anything just to be tough. Endrew and his unlikely crew set their sights on surpassing the champions and saving the city from evil, but before they can do that they must surmount their shortcomings just to survive. For a mismatched group that can't even settle on a party name, that may be a tall order indeed.

This book is available both in print and in Kindle format through Amazon.